‘Retired to my parlour to finish ‘O, The Brave Music’ which I have thoroughly enjoyed. Dorothy Evelyn Smith, whoever she is, [can] certainly get over to me the mingling of nature & love relationships which is at its most potent when youth is appreciative. She writes well, her metaphors true, occasionally striking but it’s the identification of love with pace which made me feel her strength & appreciations 0f human feelings. I love to read about people who feel & have well-described their feelings & how they feel. Then I am glad for the things — however seemingly ridiculous — which make this child feel & become hopeful for reciprocation from some person or place.’

Dorothy Evelyn Smith appears to be a popular fiction writer of the mid-twentieth century, who has been neglected entirely by scholars. There are a few brief reviews on various bibliophile websites and blogs, otherwise precious little. And yet, O, the Brave Music reads like a classic, female Bildungsroman, capturing that all-important time between the ages of seven and fifteen; a time that Willa Cather famously stated is when a writer stores up the materials that will be transformed in adult fiction. While the novel might not bear too searching a comparison with the artistic achievement of My Antonia, it is a well-crafted work that somehow seems to capture the deep sympathy of many of its readers. Like many a nineteenth-century, female-authored heroine, Ruan is cast into the world early, having been ‘orphaned’ by the elopement of her mother and her subsequent death in a riding accident, and by her father’s decision to become a missionary in Africa. Her formation derives from the number of different worlds and contrasting characters that she encounters, and the ways in which she negotiates these, learning from them and developing as a consequence. Not only does she lose her father and mother, she also suffers the loss of a surrogate grandfather figure, Joshua, the grandmotherly Mrs Abbey, and her scholarly maternal uncle Alaric, who becomes her guardian upon her father ‘s decision to leave for Africa. Yet through it all the reluctantly nouvelle riche Rosie and her ward, David remain steadfast, as does the Yorkshire moorland in which they live. In the writing of this novel, one senses the influence of the Brontës and of Mrs Gaskell, and within the text the strong influence of English poetry, including Tennyson and Rudyard Kipling is acknowledged and used as a trope of continuity in change.

Time and place are inferred, not explicitly revealed, but through prolepsis the author indicates that The Great War will happen in the near future. Through prolepsis, we also learn that Ruan and David will eventually face the world together, hand in hand and side by side as they have always been. Yet, this novel doesn’t quite end in happily ever after wedding bells. It merely states that Ruan will find the strength of character to face the world, with David, when the time comes.

Several elements make this a Bildungsroman. Firstly, the repeated transitions between contrasting situations, scenarios and characters. Secondly, the constant search for an adequate mentor figure. Thirdly, the extent to which Ruan grows in understanding of the world, and in self-understanding as she develops into a mature and congruent personality, absorbing aspects from the good influences she encounters and learning to deal with the troublesome, immoral or salubrious to which she is exposed at a young age.

I can imagine that this novel might have appealed to my mother, given her own less than perfect upbringing, with its shocks and transitions and sometimes abrupt changes. Without the benefit of a degree in literary studies and prior to the feminist revision of literary history, she would not have been in a position to articulate fully why this novel is so appealing; but she must have responded to the descriptions of the cramped life of a non-conformist minister’s family, to their poverty and the various interdictions the sisters suffer. she would also have felt empathy for a heroine who loved books and for one who wasn’t a classic ‘beauty.’ She would most certainly have felt sympathy for a heroine who had to move between worlds at an early age, just as my mother had been moved from Stranraer to Crosby, from Scottish mixed state schooling to English single-sex direct grant school, then forcibly removed from it by her step-father to work in a department store, before being sent to step-relatives in Lausanne, only to be summoned home at the outbreak of world War 2, to return to Merchant Taylors’ School for Girls, doubly different from her peers, given her different life-experiences. Other similarities would be the fact that June saw her mother as pretty but uneducated and lacking in judgement. that she came from a poor background but at university found herself, through her friend Ann, moving in the elite artistic circles of Glasgow and later being appointed to an important job in E.C.I.T.O. That a heroine could find and be herself, eventually find a loving surrogate mother in the childless Rosie and a willing tutor and mentor In the Anglican priest, Mr Lord, and a faithful companion for life in the beloved David, that a heroine could achieve all that in pre-World War 1 Britain must have instilled some hope that she too would find happiness once World War 2 was over.

The novel was first published in the UK in 1943, the date my mother read it while working at Bletchley Park, and noted it in her diary. To me this reads like a classic, female Bildungsroman, which ought to be better known and reprinted with a proper, scholarly introduction. A perfect Ph.D. project for an enterprising researcher! 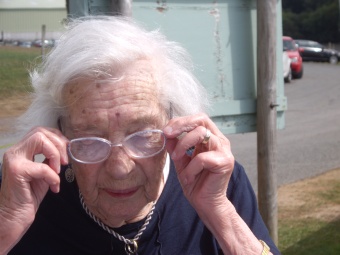 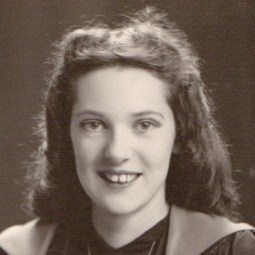 June on her Graduation Day

Bringing life into my body

making me want to climb those fearful peaks

to stand above content to see the sight they give

What lies below —forgotten at my feet.

Leaving me desolate longing for your glowing touch

And I despairing of your inner warmth

knew that the glow you bring to me

Is only warmth to me — you are

a mountain wind which heeds

not where you go.

Today would have been my mother’s birthday. A year after her death, I discovered a hand-written diary she kept during World War 2. The majority of entries were made during her time working in Hut 6 at Bletchley Park. However, she began the diary while still studying at the University of Glasgow. The entries from her time at university include two draft poems, of which I’m posting the more accomplished one here. Very much of her time and place, and not at all modernist in style, I find it poignant to have these traces of my mother as a young woman, still setting out on life, long before I was born. Her diary entries from the Bletchley Park years also bear witness to how young and inexperienced people like my mother were; enrolled straight from university to work there, yet thrown into the centre of the most strategically significant intelligence operation of the entire war.